AAAAAAaaaagh!!!! What happened?!! Your Hauptwerk system sounds like a car radio between stations when you play it. It's crunchy. Scratchy, It stutters like an electronic dance music starlet.

Is it your amplifiers? Audio interface? The operating system? Hauptwerk? Or is it some perfect storm of the all of these?

Good question! Great question! So, grab a beverage, relax and we'll work through it.

The Great Cure All

In general, if you are experiencing audio issues out of the blue, then your first course of action is to shut down all of your equipment and reboot the system. Chances are that doing so will fix the problem. If this fixes the problem, then it means the problem was most likely related to the driver for your audio card failing or the audio card itself having internal problems. So, a general reboot is the great cure all.

The Old "Birds and the Buzz" Talk

Way back in the stone age of 2008, I had a customer whose audio card just needed to be rebooted every so often. She had it plugged in and powered through her Firewire port. For whatever reason, that connection didn't survive the boot up process periodically. In that case, the solution was to power the unit using a power adapter instead of relying on the power from the Firewire port. We never figured out what actually caused the problems. We just found a workaround.

In lots of cases, you may never know what's causing it but you may find that doing a specific thing or doing things in a particular order makes your problem disappear. That's just the way it is...

If rebooting your system does not solve your audio issues, or this is a constant issue, you should probably check some other parameters.

To help to ferret out the cause, you need to understand that your Hauptwerk instrument is comprised of several different parts all working in concert to produce the overall sound.

If you are wondering why I did not include your keyboards or other MIDI devices in the audio chain, please visit the "I Want A MIDI - Clarifying MIDI Misconceptions" article before moving on.

Theoretically, there could be distortion in the samples provided in your sample set. However, the chances of this are extremely remote and you would probably have heard about the problem already from others who own that particular sample set. Additionally, it would likely be limited to only a few, specific notes out of the thousands of pipe samples in the sample set. So, it's possible like it's possible to win the lottery.

There could also be a problem with the speakers. However, it's rare that a speaker would break unless there has been some obvious trauma to it. Also, it's likely that the problem would manifest itself in a single speaker rather than multiples (unless said trauma was common to all). So, if the problem only happens with one particular speaker, then this is worth pursuing but only after looking into my next point.

Turn That Thing Down!... Which One?

Part of the confusion with Hauptwerk audio signal chains comes from the fact that Hauptwerk, the audio card and the amplifiers each have their own volume and/or gain settings. Having one of those gains or volumes set too high is usually the culprit for consistent, ongoing audio distortion problems.

What to do? Start at the beginning of the chain.

First in the chain is Hauptwerk itself. With Hauptwerk open, go to View > Large floating control panels > Audio, MIDI and Performance and open that panel. 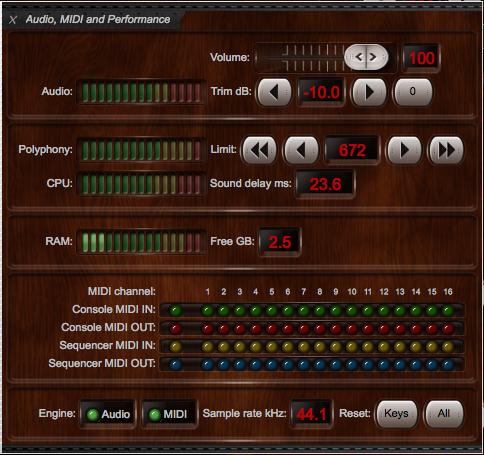 Have a look at the Trim dB area. By default, Hauptwerk is set at -10dB. If it happens to be set at 0dB or +4dB, then we've probably found your problem. Try setting the trim back to -10dB and see if that fixes the distortion issue. This will drop the overall volume but don't worry about that right now. Chances are that this will fix your problem. If it does, then you have a few of choices for the overall volume:

If your Trim dB was already set at -10 when you opened up the Audio, MIDI and Performance panel, or if you turn up the volume on Hauptwerk (after putting the trim back to -10dB) then we should move on to your audio interface and your amplifier.

There are two basic kinds of audio gear (at least); consumer-grade and professional grade. Actually, there are quality spectrums within each of those groups as well. That's why you have 8-channel audio interfaces for $499 and 8-channel interfaces for $1899. Cheaper "professional" gear is sometimes referred to as "prosumer" gear. However, in general, there is consumer and pro.

The reason this is important is because consumer-grade electronics are set to receive incoming audio signals at -10dBV (remember the Hauptwerk default output Trim setting of -10dB?). "Professional" audio equipment is calibrated for +4dBu at 600 ohms resistance.

For techies, you can read more about that here:  http://en.wikipedia.org/wiki/Line_level

For the rest, what this means is this: if you go from a "professional" audio device (i.e a home studio audio interface) that is outputting +4dBu audio signals and you plug that into a consumer device (i.e your home theatre amplifier) which is looking for signals at -10dBV, you will be exponentially overloading the input of the amplifier by a whole lot. That overloading produces distortion. (Mumblecake did the math below. The difference would be a bit less than 12dB between consumer and pro-grade equipment once you convert all of the units. I originally said that there is a 14dB difference - it's still a lot)

So, have a look at your equipment. Check the specs. You may find that you have mismatched the output and inputs of your devices.

If you have, then you need to reduce the output of the device with the higher output dB rating (example your audio interface) until you're no longer getting distortion coming out of the next device in the chain (example your amplifier). Once you are no longer getting distortion coming out, you can then increase the output volume of the second device (amplifier) to a comfortable level.

We should have fixed the issue by now. However, if we haven't, there is one more thing to check. See if your audio interface has it's own, independent audio settings panel. Check it's input gain (trim) and output volume like you did for Hauptwerk. Normally, when you set the trim and volume in Hauptwerk, those settings are transferred automatically to your interface. However, if you're still having problems, it's worth checking at this point.

In a nutshell, that's it. These are the basics for how your audio output stream works and how to troubleshoot it.

To recap: Make sure you start adjusting starting with Hauptwerk and moving sequentially along the signal chain to the audio interface and then the amplifiers. If you do not, you will be endlessly frustrated and any slight change will upset whatever balance you accidentally acquire.

BaroqueDMX (2015-06-24) Log in to Reply
I might be a good idea to give a list of some standard audio interfaces used with Hauptwerk ... and divide the list into two parts, consumer and pro grade.
DarrylLeeWood (2015-06-30) Log in to Reply
I agree that doing so would be a dream come true. However, that list changes constantly with every new product released, current product discontinued, operating system update, new operating system and driver glitch. So, I thought it better to provide the basics of how to figure it out for yourself. Plus most Hauptwerk retailers will give you their 2 cents based on current knowledge if you ask them. Usually, what they sell on their sites are a good indication of what works. Also check out the "Cool Gear" section of The Barde to find out about great new stuff. I have a new review going up any day now. In addition, most issues with interfaces are user error not a compatibility problem. Thanks for the suggestion though.

mumblecake (2015-06-01) Log in to Reply
Could you clarify on the audio levels of pro-grade compared to consumer-grade hardware, please? In particular how the Hauptwerk unit-less sound level in db compares to the units in consumer grade products of dBV and pro-grade products in dBu

it is clear that while dBV and dBu are related they are not the same which means changing the output level of Hauptwerk from -10dB to +4dB will not change between consumer and pro-grade "modes" as there is not a 14dB difference between -10dBV and +4dBu but actually less than 12dB (if my maths hasn't totally eluded me ... should be a difference of x15 RMS ... 16 would be 12dB)

DarrylLeeWood (2015-06-01) Log in to Reply
This is why you are the math wizard and I am not. :) (music degree vs. physics degree)... Thanks to you, I also discovered who not to check my facts with before publishing. I think you just got hired!

I'll fix the math in the article. However, for everyone else, the principles don't change. You can't just hook up the output of a pro-audio interface to the input of a consumer-grade amplifier without having to be conscious of making adjustments.

Whether you overload by almost 5 times or only by almost 4 times is immaterial. That imbalance will be the source of your distortion.

I'll post something on the HW forums and see if I manage to get an answer of one of our HW developer gurus as I'm totally confused. Thanks for pointing that out :)

mumblecake (2015-06-02) Log in to Reply
You are obviously absolutely right that the principle doesn't change! I'm now just trying to squeeze an official recommendation out Martin/Brett of how to set things up. Does it maybe not matter and it is consumer/pro -10dB/+4dB or is it maybe -10dB/+2dB or even -8dB/+4dB ... or maybe something completely different. I kind of guess that as -10dB is the default that that will relate to one of the levels (consumer or pro). Some clarification should definitely help.

In case of interest, the URL of the thread is:
http://forum.hauptwerk.com/viewtopic.php?f=19&t=14253

DarrylLeeWood (2015-06-02) Log in to Reply
You are right. The -10dB is the default because it a level that will keep pretty much everyone out of trouble. You can't go wrong with -10dB.

I'm not sure you'll find a definitive answer on the rest. If you're mixing the pro and consumer technologies, it will likely always be a trial and error game. I'm not sure how much real standardization there is in the consumer market.

You're probably better to just find yourself some inexpensive pro gear. You have my email. I can recommend some things if you like.