Get to know Michael Schopen - the Concert Halls' very own Bartflöte!!!

I don't know about you, but I have never played an organ that had a Bartflöte stop on it!

I have seen it a few times, but I can't recall just what instruments included it on the specification.  There was a time when I thought it was probably "something like a Quintadena," but now, I've come to think of it more like a "Barpfeife" which seems sort of like an harmonic flute of some kind.

Can anyone tell us exactly WHAT it is/sounds like?

Regardless of all that, I DO recall the first time I saw an upload by OUR Bartflöte.  I was immediately intrigued, and clicked on it, just to see what was what.  Needless to say, I was NOT disappointed!  In fact, I was delighted by the fine performance of some Pepping (I think!), a composer not too "well represented" on the Concert Hall.

Despite what organs have Bartflötes or what a Bartflöte actually sounds like, THIS Bartflöte is Michael Schopen - a fine musician, a medical man, and a friendly soul hear on the Concert Hall. 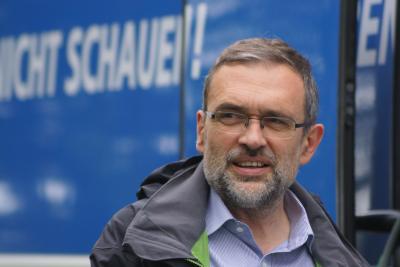 Michael was born near Cologne in 1959, taking his first piano studies at the age of 10 with a teacher who was knotting carpets during the lessons!  I'm sure there is a story or a joke in there...!!!

His first organ studies were at the age of 13 with an "excellent American organist from the Rochester, New York area, who was studying in Cologne."  (I'm sure this would have been someone from the Eastman School, but I couldn't tell you just whom it would have been.)  It was around this time the Michael stopped piano lessons instead of looking for a better piano teacher – an example not to be followed!

Indeed, but just think of ALL those rugs!!! 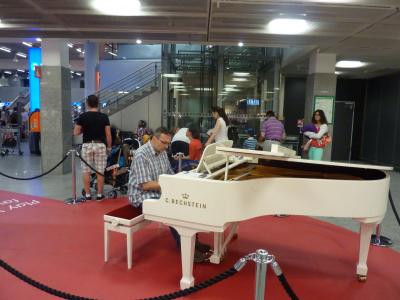 Here we see Michael at the Frankfurt Airport.

From 1973 until 1978 Michael had the privilege of private organ studies with the great Professor Michael Schneider, a man Michael describes as "the best organ teacher I could imagine."  At this time he also played "many services in many churches."

From 1978 until 1980 he was an organ student at the Hochschule für Musik in Cologne.  He also served from 78-86 as choirmaster at a Lutheran Church.

In 1980 Michael made the huge decision to stop professional musical education in favor of medical studies.  As odd as this may seem, I know/know of several superb organists who either had or have medical careers, so considering Michael's rather obvious talents, this isn't as big of a surprise as it initially seemed. 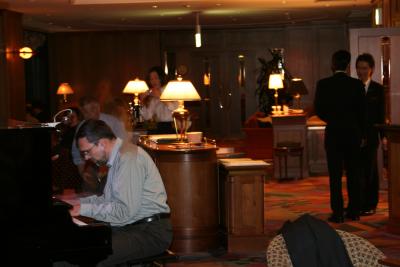 This time, Bartflöte, the pianist, is seen at a Japanese hotel bar piano.

Although his chosen path was now a medical one, the "organ bug" had infected him sufficiently that in 1980 he resumed his private organ studies with Prof. Michael Schneider, continuing to do so until 1986. 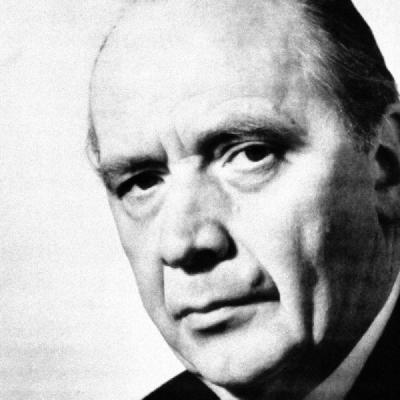 1987-1988 found Herr Schopen doing postdoctoral studies in Switzerland, with no more time for organ studies, and the decision to specialize in medical informatics.  This chosen path has been the one that our Bartflöte has maintained, and is today recognized as medical informatics expert.

Michael was married in 1995 marriage, and 1996 saw their birth of a son, and in 1997, a daughter joined the family.  At this point in life, there was very little time left for music. 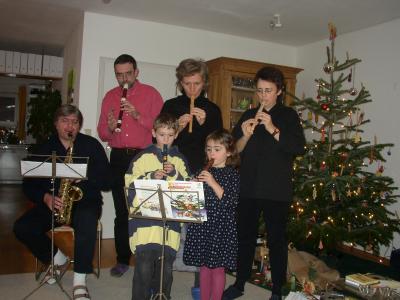 Michael and family at Christmas, 2003 - notice that nobody is watching his beat!

He returned to piano studies from 2008-2011 private studies with an excellent piano teacher, and really enjoyed this time of "discovering" the wonders of the piano.

Many faithful Hauptwerkians "accidentally discovered" Hauptwerk, and Michael is one of them.  It was in 2010, during a holiday in France – at the home of highly estimated Concert Hall contributor jpr24, that the "acquaintance" was made,  and an old love was immediately aflame again after it had smoldered in embers for more than 20 years!

By 2011, Michael had his Hauptwerk setup operational, and he began making his first uploads to the Concert Hall!  Incidentally, at the time of my writing this, Michael Schopen's total uploads stand at the very impressive number of 445!

As with each "Featured Uploader" I ask them to tell me theire "Hauptwerk Story".  We've already learned how and when Michael discovered HW and I need not say that he, and ALL of us, are highly enthused about it! 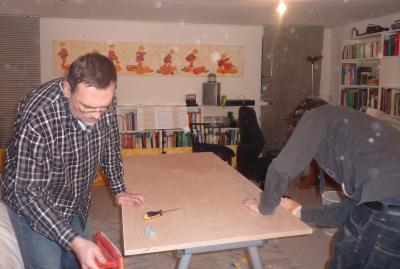 Michael and his son prepare THE Hauptwerk table!

In his own words, he says that it is the "best substitute for a pipe organ available, but certainly no full replacement."  It is the "the electronic sound optimum if you have a family, a demanding full-time job and no time to spend practicing in churches."  In short it is a "life changing discovery!"

Michael says that his wife thinks that it has a "high addictive potential," but he believes that "everything is under control".  (We ALL think it's under control too...) 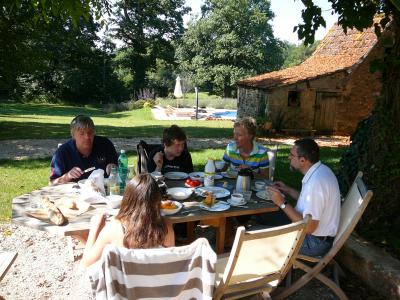 It gives the "opportunity to play instruments that we would almost never have access to, from different times, schools and countries. Experiencing the almost true sound of these instruments helps to find closer registration on any other instrument for a certain style and period."  He also recognizes the fact that it is, assuming you have the talent, a "very easy way to record organ music in high quality."

As to the Concert Hall itself, Michael says that "there is no day without CCH, if I am connected to the Internet."  It is "perhaps the richest source of rarely played organ music, and an easy way to expose one’s own music to an audience."  There are "many excellent contributors," and all are "very nice and polite people," leaving essentially "only positive feedback (although negative comments would probably be more helpful to players)." 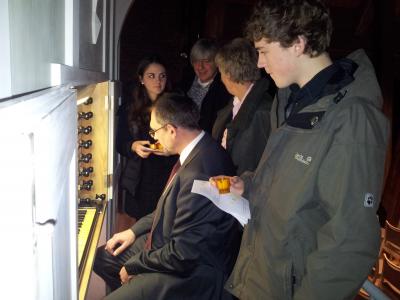 Michael (and I'm guessing family!) at the console of a rebuilt Silbermann at Christmas.

I hope that you will, if you have not already done so, check out the many skillful, interesting, and often very unique uploads by Michael Schopen, the Concert Hall's Resident Bartflöte!

Michael is also a composer, and we have the privilege of hearing some of his compositions several times in his uploads on the Concert Hall.

May I also suggest that you take a look at his webpage at http://www.bartfloete.de/

It looks to be extremely well designed, but unless I am missing something, I think it is only in German... :-)