Here at MIDIWorks, we've long been fans of the AKG k700 series of headphones; specifically, the K701, K702 and Q701 headphone models.

I had such a visceral reaction to the K701 the first time I tried them that I have loved them ever since. Brett Milan and I were at a trade show and he had a beta version of the Notre Dame de Metz organ on his machine. I really wanted to hear it. So, he loaded it up and slapped the headphones on me.

I liked what I heard but told him I wanted him to turn off the speakers so I could hear only the headphones.

He told me the speakers were not on.

I was so convinced that the speakers were on, and that he was messing with me, that I took off the headphones to better rebuke him...

The speakers weren't on.

Ever since then I have loved the K701 and the similar K702 (detachable cable) and Q701 (allegedly a little more bass optimization).

For a long time, they were a minimum of $250. More often more like $350. Currently, they run somewhere around $200 on Amazon (less expensive ones possibly because they're refurbished) which is a little easier to swallow or $349 brand-new from a pro audio retailer.

In many ways, the pricing is right. They're fantastic headphones and you really get what you pay for. The attention to detail is superb. If you've got the money, they're well worth it. You'll never be sorry you bought these.

In other ways and for other people, that's a lot; especially if you're in a position where you're building up your Hauptwerk instrument or studio setup bit-by-bit.

I recently found some great headphones available at a fantastic price.

The Superlux HD-330 headphones are a fantastic sounding set of ear cans that retail for, get this... under $100. 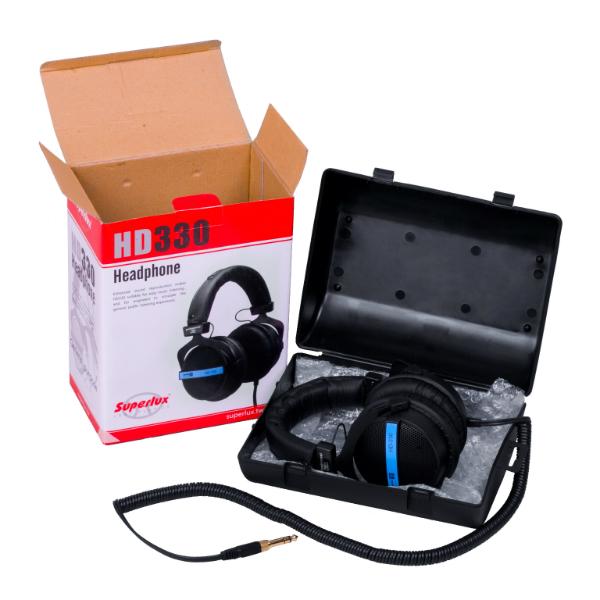 What Superlux has done is to put audiophile quality drivers into pretty average-quality architecture. So, they don't look and feel as luxurious as the AKGs but they sound great.

They have a similar, open-back design as the AKGs and a similar frequency response range (10Hz-30,000kHz). At first, they sound a bit extra loud in the low end. However, that evens out after a couple of hours of use. One Head-fi blog post  mentions that they took about 5hrs of use to break in. I found that to be pretty accurate with my own usage.

Here is a pic of the K702 (left) and the HD-330 so you can have a look at the difference in construction. 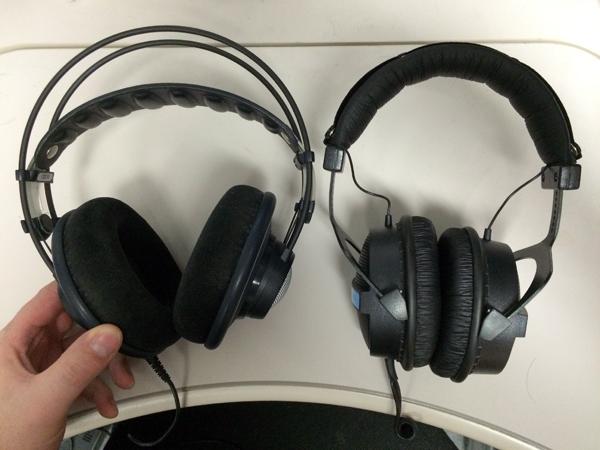 Some people don't like the pleather ear coverings and so they spend an extra $20 or so buying some Beyerdynamic DT770 ear covers. I didn't mind them as-is personally.

I have seen the HD-330 available in Europe but I haven't seen them available in North America so much. I have seen other models available. However, the HD-330 is their top of the line. So, I wouldn't go with the other models. We will have them in stock at www.MIDIWorks.ca fairly soon because we believe in them and no one else seems to be stocking them. I talked with the distributor about them and they said they were having trouble selling them because people couldn't believe they would sound good at that price... Funny, that's what people used to tell me about Hauptwerk at tradeshows... that is, until they sat down and heard it. :)

UPDATE: These are now in stock. Get them here

IdahoTransplant (2015-08-20) Log in to Reply
It would be fantastic to have the money for these kinds of headphones, but I don't. What I use are a set of SkullCandy UpRocks. They certainly are not in the same class as the AKG's or others mentioned here, but for under $30 (or less if you can find a good sale) I have found them to be very adequate for general practice use. Good bass response, pretty clean highs and I find them very comfortable.
John

BaroqueDMX (2015-03-09) Log in to Reply
I've had the AKG Q701 headset for some time and have really enjoyed them. Based on the mention of the Superlux headsets I was able to find several different versions available on Amazon.com. I ended up with the HD661 model for $43.95. The most expensive was a little over $50.00.

At first they just sounded similar in quality to the AKG Q701, but when I listened to my post of the "Alleluia Toccata" (http://www.contrebombarde.com/concerthall/playmusic/15944) I was blown away ... it had faithfully reproduced the 64' acoustic in the pedal from playing fifths using the 32' Principal. I never heard that with the AKG Q701.

The HD661 is a closed back model, and now I wish I had gotten one of their semi-open models because the headset would probably be more comfortable for longer periods of use. The specifications seem to be the same for both versions.

Another benefit seems to be that the HD661 requires less power to drive them than the AKG Q701.

This is a great bargain, sound-wise!

Fazioli (2015-02-03) Edited Log in to Reply
Yes the superlux headphone is great. I have tried one for a while (don't know the exact type) next to the K701. It was very simulair, only a bit more low freq. which is good. However i do not use either of them much. Now i use mostly the Beyerdynamic DT770 Pro, which is cheaper than the AKG and in my opinion better for organ music. Perfect for the lower 16 and 32 stops and very detailled higher frequenties. (5 Hz - 35 khZ).
But it is a matter of taste of course.

AntoniScott (2015-01-22) Log in to Reply
Many times I have been advised to do something and go ahead and ignore it. When it comes to Hauptwerk, I took Brett Milan's advise and bought the AKG 701's and never regretted it. They sound fantastic !!!! When it comes to dollars vs sound , it is a no-brainer.
They ONLY criticism I have of them ( and this is hardly fair or relevant) is that you don't feel the rumble of those 16' or 32' Principal pipes. Although I play with headphones 99% of the time ( I do have a pair of Focal near-field speakers - CSM65) with matching Sub-woofer, I rarely play them. But what I 100% of the time do, is play the headphones with the sub-woofer. Forum members have commented that there are inexpensive devices that are screwed under the seat of the organ bench. They give the bass feel by transferring vibrations through the wood. If I had known that I would have experimented with them before laying out so much money for a Focal sub-woofer.

DarrylLeeWood (2015-01-08) Log in to Reply
Unfortunately, they're not as cheap in North America. Probably due to some sort of duties and taxes. MSRP is about $96 here. Thomann has them on super sale right now. However, they're significantly discounted. They should be priced the same as the closed back version the HD-660 € 38 ish. So, I'd get them while they're discounted. Besides, they usually have a return policy if you don't like them.