Cymatic has an exciting new product for you in the Hauptwerk community who want to multi-channel. It's called the LP-16.

The LP-16 was originally designed for gigging musicians to be able to bring along multi-track back tracks to a show without having to bring a computer rig and the software to the gig. So, it's sleek, portable and, most importantly for Hauptwerk users, it has 16 channels of analog outputs that you can use for a 16 channel Hauptwerk system. 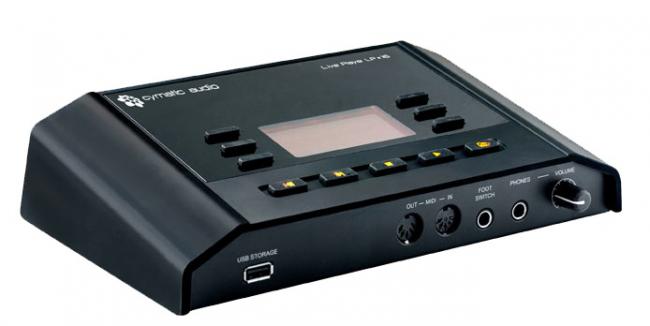 Generally, in life, you get what you pay for. So, on the surface, it might seem that you're getting 1/2 the quality because the cost per channel for the LP-16 is significantly less than for other devices in the same category. However, it pays to look a bit deeper in this case.

It's not hard to argue that devices like the 1818VSL, Saffire Pro 40, Audiofire8 (popular but out of production), Octa-Capture, M-Track Eight, and the 828 mk3, are all in a similar class of audio converter. They share similar price points, they're aimed at a similar market, similar features and specs. Granted, some have bells and whistles that the others don't have and that accounts for some of the price variance.

Some similarities between all of these units are:

All of these features are great and useful in the context of a home recording studio. However, Hauptwerk instruments don't use audio inputs. They only use outputs.

Until now, the devices that had both inputs and outputs were all we had to choose from for Hauptwerk. It meant that you were paying for a lot of features and capacity that you would never use. Now you can get an affordably priced audio output interface which only focuses on audio outputs. This is the LP-16

So What, Exactly, Does It Have?

For the purposes of Hauptwerk, the LP-16 has:

I realize that the reason you'd be looking at the LP-16 would be primarily for it's audio outputs. I have to say though, it looks and feels well built; especially for home use. Take that for what it's worth.


Not The New Kids On The Block

Cymatic may be a new name to you. It is, indeed, a new name to the market. However, their partner company is Archwave who is not new to this market. They have been making the innards that are used by many of the other audio interface companies for quite some time.

If you have wandered into this post from outside the Hauptwerk community, you'll notice that I left a lot of features out of this review. There are tons of features for standalone playback and USB file management on-the-go. There's also an 1/8" stereo line in so that you can play back audio from an analogue source through the LP-16. However, these features matter not to the Hauptwerk user.

Note that the highest audio resolution for output is 24-bit 48kHz. So, if you need more than that, you'll have to look elsewhere for your audio conversion.

Also note that the 16 1/4" outputs are TS (unbalanced) instead of TRS (balanced) outputs.

This is one major difference between the aforementioned devices and the LP-16. What this means is that you will want to use shielded cables to go from the LP-16 to your amplifiers. This will protect the audio signals from noise and interference from other audio and electrical cables that might be in the path of your cable. It also means that your amplifier(s) will need to be relatively close to the LP-16 to prevent signal loss. None of these are show stopping items. They're just something to be conscious of when you're setting everything up.

So, if you're looking for an inexpensive way to get your multi-channelled Hauptwerk instrument running, this is definitely worth a look. In fact, it's a bit of a no-brainer. It certainly compares favourably to a lot of the prosumer interfaces that many Hauptwerk users use and are perfectly happy with.

You can find them available at www.midiworks.ca in "audio/MIDI gear" or at retailers worldwide.

DarrylLeeWood (2015-07-10) Log in to Reply
Great! Get them now while they're still at $399USD. The distributor said the pricing is going up to $499 very soon (hence the pricing in the article)
TomLangley (2015-07-14) Log in to Reply
Hiya Darryl,
Have you used the device to date? Any pointers? It is supposed to arrive tomorrow along with a 2nd 8 channel amp so I'll have 16 amped channels to play around with. Of course, not as many speakers prepared to handle it just yet.
lynnup (2016-06-26) Edited Log in to Reply
Hello, my Mu-1820 died and found one of these at BH open box and ordered it. Easy to install, software update, plug is in and I'm up and playing again. Not siure what to say about it, liked the fact that it is all about the outputs not inputs.. Lynn

Interesting, affordable solution indeed for a "lot of channels"

It is great to find new products like the Cymatic and Motu, offering for the Hauptwerk users more affordable multi-channels solutions.