Multi channel audio is consistently one of the most confusing elements to setting up a Hauptwerk instrument.

So, I thought I'd explain a few things and show a test case.

The first thing to explain that each entry in "Audio output groups" is the name you are going to give to a group of output channels that you want to be associated with each other. You can then assign output channels in the "Audio outputs" area by selecting that name in the "routing and aux mix" tab for those channels.

For example: You may have a "Main Output" group which is where you want most of your ranks to play through. However, you have a couple of extra speakers that you want to be for an antiphonal rank of trumpet pipes at the back of your room. You would then make a new output group called, say "Antiphonal".

After you have made your output groups, and assigned your audio outputs to those groups, you need to direct pipe ranks to play though those output groups.

To do this, you will go to Organ > Load organ, adjusting rank audio/memory options/routing and select the sample set you wish to configure. Highlight the rank(s) you wish to go to a particular output group. Then select that output group in the "Audio output group" drop down box.

Once you have re-routed all the intended ranks, click "ok" and the sample set will begin to load.

I do not, typically, use multiple audio output groups unless I have the aforementioned antiphonal stop/division and that rank is physically in a different area from the rest of the speakers. The other situation where I might use it is where there are a bunch of  different kinds of speaker pairs.

The problem with that arrangement is that, if you're only playing the swell at the moment, you have a whole bunch of other speakers not doing anything.

Luckily, Hauptwerk is very smart with it's multi channelling. So, you can do much better than that kind of configuration.

If you have a pipe organ with 1000 pipes per manual, you basically have the potential equivalent of 1000 speakers sounding per manual. Each one of those speakers is a unique sound source. You would not use them all at once in reality but you are going to be using more than 2 at any given time. So, why not maximize the number of unique sound sources at your disposal by using as many speakers as you can at any given time?

I should clarify what I mean by this. What I'm not talking about is taking a stereo, left and right signal, and duplicating that same collection of sounds out multiple sets of speakers. This tends to cause problems with nodes and phasing.

What I am talking about is having a different collection of sounds coming out each set of speakers.

This technique allows the room to work as it would with a real pipe organ. The many pipe sounds, from different sources, bounce around the room and react with each other in 3D space. It allows the sound waves to combine in wonderful ways and diffuses the sound so that it becomes semi-directional as well. You'll need to use this in a situation where the congregation wants the organ to be a performance instrument and they care that the effect is that of a real pipe organ.

This pretty much sums up the basic theory behind how we approach multi channel audio.

So, in that spirit, here is an example of setting up 4 speakers with one stereo sub.

1. Default Audio Output Page - Open General Settings > Audio Outputs. You will likely see this as the default settings that come with Hauptwerk 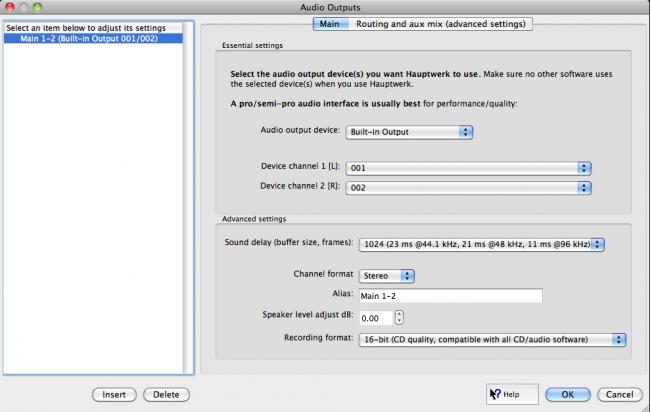 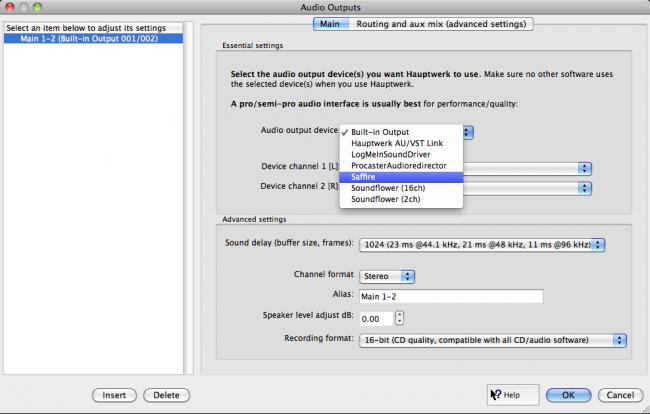 3. Add a Second Output- click on "insert" and make a second output like you did the first. Only on this output, use different channels in the Device channel 1 and 2 fields (because you have already used 1 and 2 above). Here I have used channels 3 and 4. Notice that I also renamed this output as describe above.

If you have more main speaker channels to add, you can repeat this process. 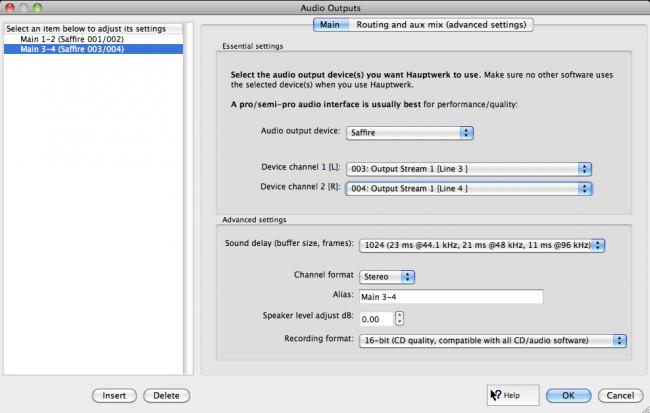 4. Setting the Device Channel - another look at the settings for Main 1-2. 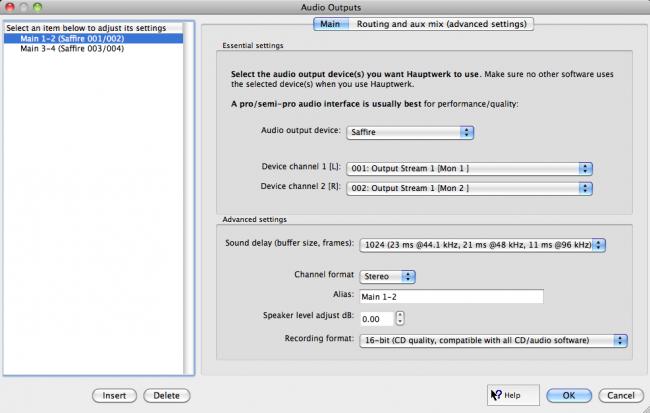 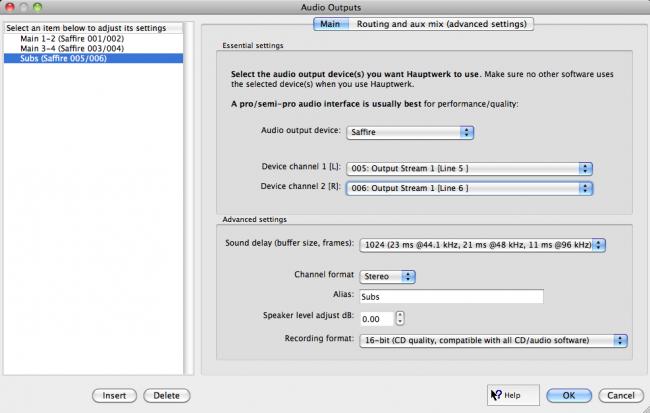 6. Setting the Sub Channel to an Aux Mix-Down Output - do this only on the subwoofer output. 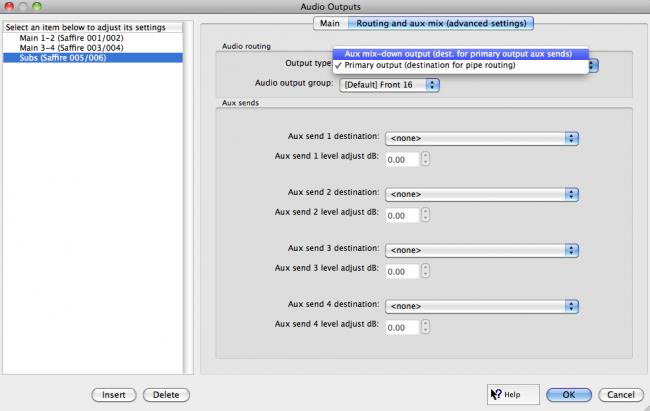 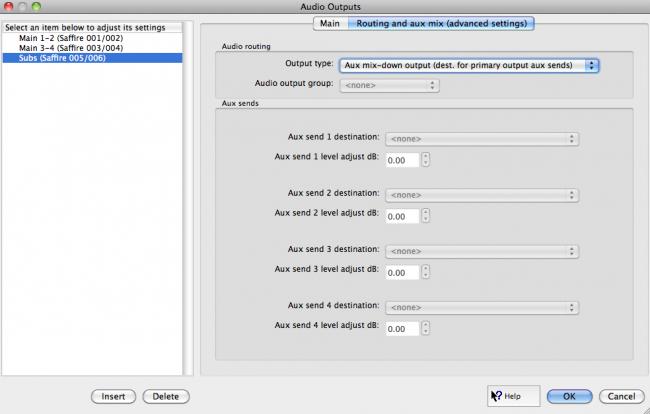 7. Setting the Mix-Down from the Mains to the Sub - Go into the Routing and aux mix tab for each of the "Main outputs" and select your subwoofer channel (in this case "Subs") in one of the Aux send destination. 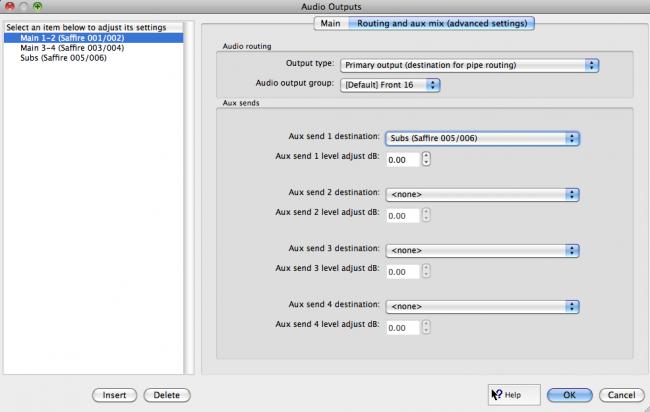 And then again for the rest of the outputs 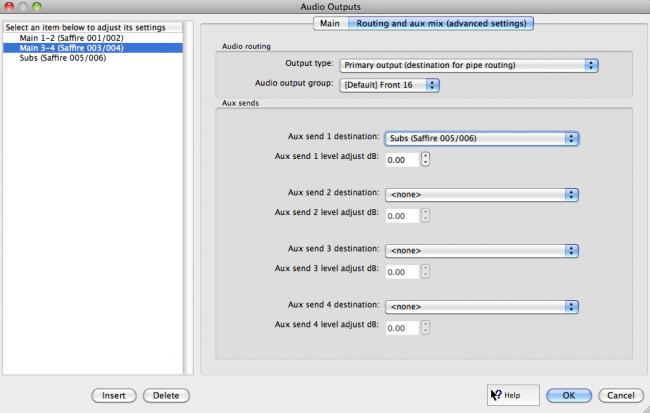 I hope this helps.

Kobuhei (2015-06-16) Log in to Reply
Could you recommend me any multi channel speaker for my Hauptwerk? Which maker is the best? Or is it enough to buy any device that has more (e.g. 4) speakers? I would like to try the surround function but I have only 2 speakers now.

mmayse (2015-06-15) Log in to Reply
I set up my sub like you suggested, but I continue to get an error that Sub "has no output designated". If I change it back to primary output instead of aux mixdown, it's happy. What suggestions do you have?

DarrylLeeWood (2015-06-15) Log in to Reply
It sounds like you may have selected "aux mixdown" in output type for all channels instead if just for the sub channels. That's the only way I could reproduce that error message. The main (non-subwoofer) channels should have an output type of "primary output".

mmayse (2015-06-16) Log in to Reply
Thanks -- but I figured it out. The Sub channel doesn't want to be an Output Group. Once I deleted it from there, it worked like a champ. Thanks for your suggestion!

1961TC4ME (2014-11-10) Log in to Reply
I've used a very similar scenario with a mix down sent to the sub as well except I was physically selecting which ranks I wanted to send to which "main" speaker pairs for the routed part. I will give this a try and utilize HW to do the algorithms instead.

Very good article on how to set this up, but for those that do not fully understand how to correctly load the organ in order to use this scheme, it might be helpful to go into just a bit of detail concerning loading the organ from the rank table for the first time.

profeluisegarcia (2014-11-09) Log in to Reply
...and play?
Now this insurmountable task seem feasible.
Thanks,
Luis